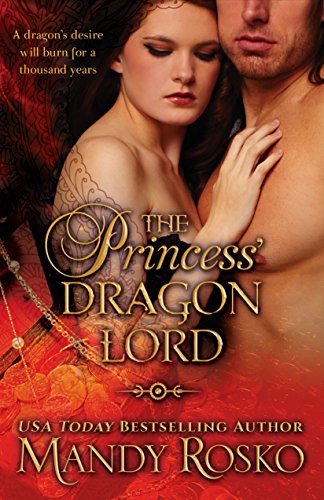 Part of the The Princess' Dragon Lord series:

Being seduced by a totally alpha dragon shifter who also happens to be a prince? Yes please!

Timid Diana Winters doesn't get much excitement, until she goes for a hike in the woods and is attacked by the trees.

Like out of a fairytale nightmare they uproot themselves and go on the offensive, and she is chased through the forest before tumbling down a waterfall, only to wake up in the bed of the most gorgeous man she's ever seen. A man who claims to be a dragon lord, and her husband who killed her a thousand years ago on their wedding day!

Lord Azoth Dracamire vows to never have meant her any harm. Though the marriage between himself and his princess bride was arranged, he still loved her, and his heart yearned for her every day since the tragedy. Someone put a magical potion in his goblet on the day of their marriage, and he has paid for it every day since for a thousand years.

Although Diana struggles with the physical pull she feels towards him and Azoth's obvious lust for her as he insists on seducing her again and again, one thing is certain: someone sent those monsters after her in the forest, and they still want her dead.

Azoth will not let tragedy strike again. He will protect his princess with his life this time, and though his dragon-sized desire for Diana has burned for over a thousand years, so has his need for revenge.

If you enjoyed this story, check out the sequel novella The Lady and the Dragon's Holiday!