As Cold as Ice

As Cold as Ice 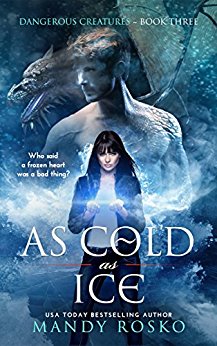 Part of the Dangerous Creatures series:

As a former hunter, and a paranormal in hiding, Jessica Frost knew of the dangers of being caught.

Well, she'd been caught. Jessica had stupidly revealed her powers of ice and snow to save her friends, and now she was in shackles, in a box, being examined and forced to fight to survive. But she'd trained for this. Jessica had to live long enough to make a plan, to escape. Luckily, she has something in her back pocket.

That plan is Soren Birgir, kind of quiet guy, kind of cute—okay, a lot cute—he's a lab rat working for Head Office, studying the creatures brought in, but also a paranormal himself. Jessica can't put her finger on exactly what he is, but it's something big and powerful, and one wrong word from her could put him in a box next to hers. Strangely, Soren doesn't resist. Maybe that crush he'd seemed to have on her had been the real deal after all. Well, that was a downer. He was handsome, and she liked kissing him—really liked it—but Jessica couldn't afford to get close. She couldn't afford to be swept away whenever Soren did something that made her heart ache.

Like stand up for her and protect her. The feeling it brought made her weak in the knees. Weak enough to desire him, to want to escape with him. Something that would be entirely impossible. Unless a miracle happened, one person would have to stay for the other to go, and Jessica was determined that it be her, even if it ripped her heart in half to do it. Her powers were over the cold, so it wasn't a stretch that she could make her heart cold to her feelings long enough to leave Soren behind. Right?

Published: December 8, 2015
Genres:
Paranormal
No comments yet
← PREVIOUS POST
Gonna Make You Howl
NEXT POST →
A Shock to Your System